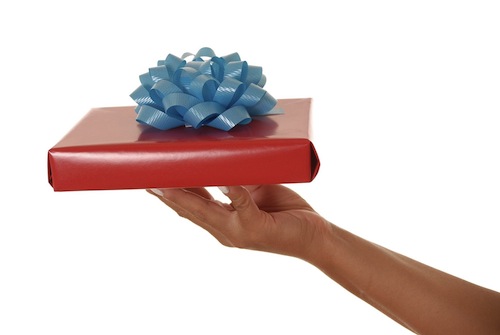 Among the writers I know, Lewis Hyde’s The Gift is almost always required reading. It is a treatise on the differences between gift-giving cultures (mostly tribal and now disappeared) and the commodity-driven cultures born of the Industrial Revolution (still predominant and thriving stunningly in the glut of digital information).

Tribal societies grew and prospered through giving gifts, which is a notion barely recognized in commodity-driven societies. The notion of the gift is that it is proffered freely and openly, and that the giver does not expect to have it returned exactly as it left him, if ever. Indeed, the ideal gift goes from the initial recipient to another and on to another, growing in emotional value for the givers and the recipients, if not in economic value.

With commodities, each item has a financial value, and without the agreement to exchange the item for something of equal value (money, for example) there is no exchange. The item remains the same as it has always been, hardly an acquirer of added feeling. Sitting on a shelf, it has no emotional value of any kind, and when sold, it is no gift, because it has not been given.

This is admittedly a crude explanation of Hyde’s fine essay. In its first 145 pages, he gives numerous examples of these two ways of running a society. There is even a chapter on the subject of usury that is the only piece of writing about the subject that I’ve found even remotely interesting (although, of course, there is Shakespeare’s The Merchant of Venice, which isn’t bad.)

The second half of Hyde’s book is an attempt to point out how the making of art is the greatest gift of all. He does this through a description of the lives and work of two poets: Walt Whitman, who was the ultimate spokesman for the gift, and Ezra Pound, who eschewed the gift finally, in favor of imposed governmental order.

Walt Whitman’s poetry, Hyde explains, is the very essence of the kind of gift that an artist receives at birth, and the artist’s adding to that gift his or her own acquired craft as a creative spirit. Hyde also shows how Whitman’s very life was an exercise in gift giving, especially in the quite moving descriptions of Whitman’s care for and love of severely wounded Union soldiers during the Civil War.

Ezra Pound recognizes the erratic and anarchistic ways in which art first emerges from the soul, something every artist experiences. But he feels that the work can only be perfected by a constant effort of what he calls “the will toward order.” The will that Pound so admired had much effect upon his life, especially when, smitten by Mussolini and the fascists, he broadcast diatribes in English on Italian radio against Jews, democracies and the American government. He was an American citizen, and this took place during the Second World War. So the troops, much less the American government, were not amused.

It is a curse upon every artist to have to deal with being ignored by the public, and most artists are indeed so disdained. I whine about it every day, at least to myself. Sometimes, when especially down, I let my friends know…loudly. I used to worry about this, and to think that I was most probably a fool for wanting to write. I write anyway because the process gives me such joy that I cannot bear to miss more than one day.

But in 1983, when I first read The Gift, I realized that being ignored made my writing flourish in an important way. “To convert an idea into a commodity,” Hyde wrote, “means, broadly speaking, to establish a boundary of some sort so that the idea cannot move from person to person without a toll or fee.” If this is so, the fee is a barrier to what the act of writing can actually produce. It stunts the writing. The fee is a fine.

I spent decades in business selling things, while at the same time writing at lunchtime and at night. Being paid for my services was thus so ingrained in my thinking that the idea of giving my written work away was laughable to me. As Samuel Johnson once said, “No man but a blockhead ever wrote except for money.”

But very little money ever came to me from all those words. Everyone I know who writes has labored in the desert of not being published. Some have perished in that dry landscape. Others continue wandering there, and I encounter them all the time. You become especially lost if you have bought traditional publishing’s idea that only through the marketplace does respectability as a writer become possible. So, corporatized publishing companies, a constant eye on sales figures, the literary agent’s assurances of no-possible-advance/no-publication, and all the attendant fees paid to all these entities come into play, leaving most writers to go on wandering.

Hyde writes about several authors and their perceptions of the gift they have been given, which they wish to pass along. One of them, the novelist and mariner Joseph Conrad, puts it this way in his famous preface to the novel The Nigger of The Narcissus:

The artist appeals…to that in us which is a gift and not an acquisition — and, therefore, more permanently enduring. He speaks to our capacity for delight and wonder, to the sense of mystery surrounding our lives; to our sense of pity, and beauty, and pain; to the latent feeling of fellowship with all creation…

Hyde gives us a summation of this process in a wonderful paragraph from The Gift:

The artist’s gift refines the materials of perception or intuition that have been bestowed upon him; to put it another way, if the artist is gifted, the gift increases in its passage through the self. The artist makes something higher than what he has been given, and this, the finished work, is the third gift, the one offered to the world in general.

Incidentally, Hyde does feel that there can be an understanding between these two poles of activity, in which the gift and the commodity can accommodate one another. The chapter on usury interested me as much as it did because Hyde talks about how usury under certain circumstances can be the way in which a commodity can become a kind of gift.

For myself, re-reading this book after a 10 year hiatus from business, during which I’ve written three novels and three story collections for very little money, was a welcome gift that allowed me to justify to myself all those nights I spent dreaming things up and writing them down.

Terence Clarke’s new novel The Notorious Dream of Jesús Lázaro will be published later this year.