Home » Argentine tango » On Tango: Piazzolla, Before & After

On Tango: Piazzolla, Before & After 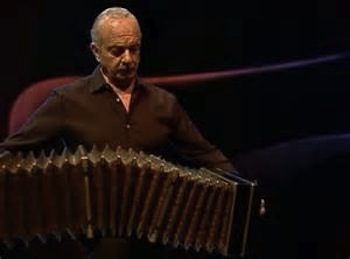 In Argentine tango, there is “Before Piazzolla” and “After Piazzolla.”

Astor Piazzolla (a master of the bandoneón, the concertina-like instrument that many consider the soul of tango) revolutionized tango in ways that either electrified his numberless fans (most of them outside of Buenos Aires, Argentina, which is the home of tango) or infuriated his many detractors (most of them inside Buenos Aires). He once remarked how dismaying it was to him to be able to fill every seat at the huge Olympia Theater in Paris, while barely thirty people — and many of them loudly hostile — would come to see him in a club in Buenos Aires.

Astor brought into tango many elements of sophisticated classical music that it had never heard before. Fugue, counterpoint, extraordinary poly-rhythms and dissonances that few of the usual tango musicians in Buenos Aires — as fine as surely they were — could even comprehend. Indeed Astor spoke of his own compositions as “music based on tango”, rather than as tango itself, and this is a fair judgment.

But woe betide the tango fan who does not understand the importance of traditional tango to Astor’s work. Astor was, after all, the principal arranger for several years for the renowned Buenos Aires orchestra of Anibal Troilo, himself a truly innovative composer.

The noted tango composer and pianist Osvaldo Pugliese was a great fan of Astor, and vice versa, although their styles of tango were markedly dissimilar. In his book Astor Piazzolla: A Memoir (compiled from interviews by Natalio Gorin), Astor writes “I wrote a special arrangement of my ‘Adiós Nonino,’ and Osvaldo looked clueless — he couldn’t play a note. Later I tried to play [Osvaldo’s] ‘La Yumba’ his way and I couldn’t. I felt bad, as if I’d dirtied his music…”

There was a further quite special moment earlier in Astor’s life, when he met another tango revolutionary, Carlos Gardel. Generally regarded as the greatest singer of tango ever, “Charley”, as Astor called him, was an international recording and film star when he met the thirteen year-old Astor Piazzolla in New York City, where Astor and his parents Vicente and Asunta were living. Vicente had taken his family from Argentina to New York in 1924 (when Astor was three) in order to find work, and they lived on the Lower East Side (ironically, near Astor Place) for many years.

Astor was a scruffy kid with a limp caused by an accident of birth in one foot, which required surgeries throughout his childhood. He walked funny, he was little, and he talked funny with an Argentine accent. He got into a lot of fights.

Astor began playing the bandoneón in New York at his father Vicente’s insistence, and as a thirteen year-old in 1934, ever alert to job possibilities, he got work as an errand boy on the set of El día que me quieras. This was one of Carlos Gardel’s several musical comedies that were filmed at Paramount’s Astoria, New York studios. Within a few days, Astor and the great Charley became pals.

Astor told Charley that he played bandoneón. As a result, the singer and his musicians tutored Astor on his instrument, and indeed Astor accompanied Charley on a couple of occasions at the Campoamor Theater on Fifth Avenue in Manhattan. Charley thought so well of Astor that he gave the boy a bit part in El día que me quieras. Gratefully, Vicente Piazzolla, an amateur wood carver, made a small carving of an Argentine gaucho with a guitar, which Astor delivered to Charley.

Charley was killed in a fiery airplane accident in Colombia on June 24, 1935. Many years later, Astor received a message from his very first bandoneón teacher, Andrés D’Aquila, who still lived in New York. Andrés had been passing by a pawnshop in Manhattan and had spotted a small wood carving of a gaucho with a guitar in the window. Curious, he looked at it more carefully and saw the name “Vicente Piazzolla” carved into its base. The carving itself was charred in many places, the evidence that it had been in a fire. Next to the figure was a hand-lettered sign that read “This belonged to an Argentine tango singer.”

Andrés went into the shop, to buy the gaucho for Astor. But the price was $20.00, money that Andrés did not have on him that day. The shop owner agreed to hold the carving overnight. But when Andrés came back the next day, the gaucho was gone, sold.

In his memoir, Astor writes, “I never lost hope that I would find [the carving] and that whoever has it some day would call me.” That never happened, and among the gifts offered by a fan to a performer, that gaucho carving, wherever it is, surely conveys a far more personal artistic affection — equally to the young prodigy who delivered it and his mentor the immortal star who died with it — than almost any such gift ever could provide.

Terence Clarke’s recently completed screenplay Astor & Charley is based on these events. This piece appeared originally in Huffington Post.