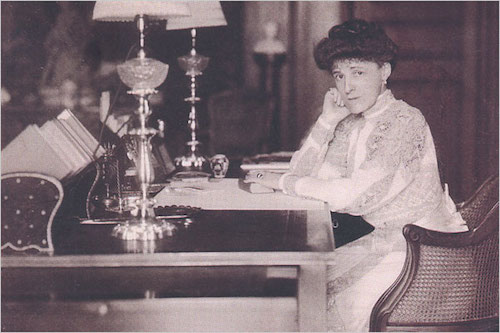 I have been a fan of Edith Wharton’s work for a very long time, and I recently had the real pleasure of re-reading The Age of Innocence, The House of Mirth and several of her stories. Not having gotten enough, I read The Custom of the Country for the first time as well as The Reef.

I came to Wharton through her friendship with Henry James, whose work I had idolized as a graduate student. I subscribed then to the silly notion that James was the god and Wharton an accomplished but, in the end, second-rate writer, when compared to the grand stylistic accomplishments of The Master.

I got over it.

It is no disparagement of James’s work to basically prefer Wharton’s. He is The Master, and there is no book on earth quite like The Ambassadors or The Golden Bowl. But I had read both authors before I myself became one, and so I did not understand the difficulties of writing novels or, more particularly, the kinds of social novels that I came to love writing myself.

Both James and Wharton write about wealthy society in the late 19th century United States and western Europe. He once said of his work, “Yes, I have trifled with the exordia,” a word that I believe can be translated as “the beginnings of things”. But James’s work exhaustively plumbs the depths of human emotion through its exemplary–extraordinary–vocabulary and deliciously complex sentence structure. He understands the English language almost as well as Shakespeare did, and his constant contemplation of how to express emotion most intimately is for me one of the grand achievements in English literature. So, when he talks about trifling with the exordia, I believe he is making a joke, because he goes so far beyond mere beginnings.

Edith Wharton is a different kind of writer. She was of course a very close friend of James for many years, and I can only try to imagine what conversation between them was like. Wharton’s writing is far simpler stylistically than James’s, but that notion is not intended to diminish her work at all. She writes a social scene in many ways more completely than he does because she has such an eye for the physical details of dress, setting, furniture, greenery, china, flatware…whatever…that fills the scene, and a gift for description that enables us to see those things with brilliant, revealing clarity. Also she has a splendid comic ear for conversation that often makes such scenes almost painfully funny…or just plain painful (i.e. The House of Mirth).

Despite my avid reading of her work, I haven’t known much about Edith Wharton, except that she was born Edith Jones and was a denizen from birth of highest New York society…so high that her family name is the source of the notion of having “to keep up with the Joneses”. I had read the reviews of R.W.B. Lewis’s Edith Wharton: A Biography when it came out in 1975, and since then have intended to read the book itself, often impatient with myself for being so lazy about such an applauded work. How could I care so much for what Mrs. Wharton had done, while knowing hardly anything about her?

I just finished the book.

Lewis is himself a very fine writer. Whether describing a motor trip with James through some part of Europe or a dinner party with Bernard Berenson or Andre Gide or Marcel Proust at her apartment at 58 rue de Varenne in Paris, or an exchange of letters between herself and a lover (William Morton Fullerton) or a dear friend (Walter Berry), Lewis is unerring in the gracefulness of his prose, with a clear understanding of Mrs. Wharton’s heart and mind. Also, he will give occasional descriptive sketches of what she is writing at the moment that caused me to keep a list of stories or novels by Mrs. Wharton that I have not read. That list comprises about a dozen books, and my plan is to read them all…soon. Also, Lewis’s writing does not suffer from the barren academic pointlessness that burdens so much contemporary criticism. He’s clear, funny, erudite and thoughtful. If, in a moment of foolish error, you bump into examples of how academics write these days, you’ll realize what a great gift Lewis has offered us.

For a full and perceptive view of the life of the wonderful Edith Wharton, this book is where you should start.