Home » Uncategorized » On Tango: At The Heart Of Tango: Pablo Estigarríbia and Adrian Jost

On Tango: At The Heart Of Tango: Pablo Estigarríbia and Adrian Jost

It’s a given that Argentine tango has a significant influence on contemporary music around the world. Most of the musicians who are responsible for that are themselves exclusively Argentine. There have been few notable tangueros who were not born in that country.

Among those groups in which non-Argentines do play a significant role is Trio Garufa, based in San Francisco. While their co-founder and fine guitarist Guillermo García hales from the Argentine city of Bahia Blanca, their bassist Sascha Jacobson is an American who is renowned for his work in several genres of music, from jazz to contemporary classical to, of course, tango. The third member of the group is bandoneonista Adrian Jost who, though born in Switzerland, received his master’s degree in electrical engineering and music technology from Northwestern University, and is the other co-founder of Trio Garufa. 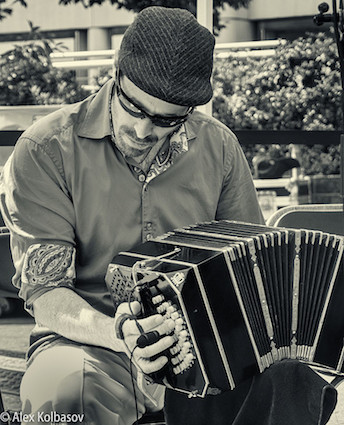 Adrian is superb on his instrument. He has a complete understanding of tango’s unique underlying rhythms, and plays his bandoneon with exceptional drive and humor as well as with a real respect for tango’s underlying heart, which is famously large. He brings authentic emotional authority to the music that is rare among players who do not come originally from Argentina.

At the moment, Adrian is playing with one Argentine who exemplifies that authority, the pianist Pablo Estigarríbia. One of the most noted younger Argentine players, arrangers, and composers of tango, Pablo has made several recordings (one of which, Tangos para piano, was the recipient a few years ago of the Premio Gardel, the most prestigious award offered by the Argentine recording industry. His latest collection, with legendary singer María Graña, has been nominated for a Gardel this year.)

Adrian makes clear why he so enjoys playing with Pablo. “It’s a privilege for me. He’s such an accomplished and creative tango pianist…definitely a virtuoso. And his recordings are not just recordings. Anyone can make a recording, but his albums and projects are revered by his contemporaries.”

Pablo and Adrian are unusual as tango musicians, in that both are devotees of the dance as well as the music. Each was initiated into the subtleties of tango through their dancing of it. “Most of the professional tango musicians I know don’t dance,” Pablo says. “But of course one of the most direct ways of learning the intricacies of rhythm in tango is to get out on the floor.” This was so important a revelation to Adrian that, when he and Guillermo García of Trio Garufa first met the bassist Sascha Jacobson, they realized that, although a first-rate musician, Sascha didn’t yet have the dynamics of tango, the surge of it, in his blood. So they told him to go out and learn the dance. If you hear Sascha play tango now, you realize how good that advice was.

Adrian and Pablo were both in Buenos Aires recently, and spent an evening over pizza with the virtuoso bandoneonista Victor Lavallen. Victor was a principal arranger for many years for Osvaldo Pugliese, and is something of a tango immortal himself in Buenos Aires. (Pablo and Victor, joined by bassist Horacio Cabarcos, have collaborated on the recording De Menor a Mayor.) Riding in a taxi afterwards, Adrian and Pablo decided to play together, and sealed the deal with a handshake.

Adrian is quite specific in his reason for wanting to play with Pablo. “It’s the attention to detail in his music,” he says. “Pablo introduces new elements to his tango, but it remains connected to and deeply rooted in the tradition of tango. Nevertheless his tango is very much his own.”

Pablo is indeed a stickler for precision in the music, and is devoted to practice and rehearsal. “And that’s one thing I like especially about Adrian. He’s Swiss. So he practices. He’s always on time to a rehearsal, which you can’t say is the case with most Argentine musicians. Above all, he knows tango and what makes it work. He loves the music that I love, and I love the music that he does.” The list of composers and musicians the two men admire includes classic tangueros from the Golden Age of the 1940s and 50s (Troilo, Pugliese, et. al.) as well as players on the contemporary scene in Buenos Aires, and even some concert-stage composers and players, most notably, of course, Astor Piazzolla.

There is often a gulf in taste between those musicians that specialize in traditional tango, and play principally for the dance in milongas, and those concert-stage musicians who may be more classically trained, but who still care for the tango form.  “Concert musicians don’t often do milongas, because of their training,” Pablo says. “And milonga players often feel that all that classicism is way too restrictive.”  He thinks that this need not be the case. “You’ll find it unusual that Adrian and I do both concerts and milongas. Because we feel that, in the end, tango is a dance. It can have all the subtleties that a classical training can bring to it, but it is always danceable.”

At first, their coming together as a duo featured an unusual practice schedule. “It was a real debut experience for me,” Adrian says. A large smile appears. “At first, I thought it was crazy. We had trouble rehearsing because I was in San Francisco, and Pablo was in Buenos Aires. So he would harmonize a tango, and then send audio to me of the piano by itself, as well as the written score. I’d figure out the bandoneon part, and send back audio and ideas for Pablo to critique.”

Pablo laughs with this description. “Yes, I believe it was the first series of rehearsals in the history of music to be conducted on ‘WhatsApp.’”

Pablo and Adrian are concertizing this month on the west coast of the United States. They are in the planning stages for their first recording together.

Terence Clarke’s essay “Fathers, Sons, and Seizures” was published last month. A new novel, The Splendid City, is based on a life-threatening event in the life of the great Chilean poet Pablo Neruda. It comes out early next year.