Home » Uncategorized » On Tango: The Man Who Signed Gardel

On Tango: The Man Who Signed Gardel

Max Glücksmann’s is not a household name, to be sure. But were it not for him, the Argentine recording and film industries would not have developed as quickly as they did or –- especially in the recording of tango– with such formidable results. 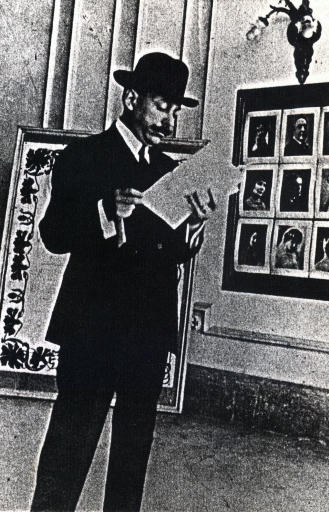 An Austrian and part of the important Jewish immigrations to Argentina in the nineteenth and twentieth  centuries,  Glücksmann arrrived with his family in Buenos Aires in 1890, when he was fifteen years old. Max was a very industrious young man, and he went to work soon after his arrival in Argentina for Lepage y Compañia, a photography studio. He was one of three employees in a shop that was seven by twenty-five meters in its entirety.  He often bragged later in life, shrugging his shoulders in the Buenos Aires manner of humorous acceptance of one’s fate, that his first salary was fifty pesos a month.  Even in 1890, this was not a lot.

Lepage y Compañia recognized the coming importance of the moving picture, and expanded its operations in 1900 to that primitive but exciting art.  In the meantime, the possibility for recording voice and music had also become a reality.  In a 1931 interview, Max explained what had been happening in Buenos Aires: “Forty years ago, the first Lioret phonographs were imported from France.  They used celluloid cylinders.  Then came cylinders made of wax. And finally in 1900 disks appeared, even though they were pretty bad.”  Max understood that, although these first recordings were mostly by opera singers like Enrico Caruso, the real market lay in popular music artists of the period.  In a day in which radio was in its own infancy, these recordings were usually the only way that large numbers of people could hear different kinds of music.

“When the gramophone really came into its own in Argentina,” Max said, “it was thanks to the popularity that, day by day, was enjoyed by criolla music (music from Argentina itself). Also from the time of the payadores (itinerant singers) like Negro Gazcón, Gabino Ezeiza, Villoldo and others, who were singing just as the disk was perfecting itself.”

Max, recognizing that cinema and recording were the coming industries, applied himself to his work so intently that, in 1908, when Lepage y Compañia now had one hundred fifty employees, he bought the company.

Soon thereafter, he built the first recording studio in Argentina, taking advantage of new technology that allowed recordings to be made by the thousands. He also worked to establish the legal rights of music authorship for performers, which resulted in artists’ royalties, something that had not previously existed in Argentina.

Eventually Max Glücksmann was personally to build the Argentine recording and film industries into a business powerhouse. He also had extraordinary taste when it came to popular music, and he knew he was onto something when he first heard the singing voice of Carlos Gardel. 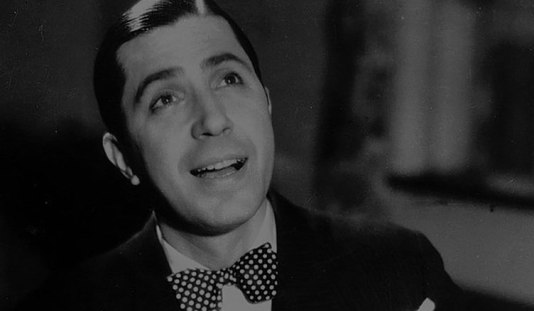 A former street singer, Gardel had made an early reputation as half of the Razzani-Gardel duo that was popular on the Buenos Aires music scene before and during World War I. Eventually the two split up, and Gardel continued on as a single, signed to an early recording contract by Max Glücksmann.  Gardel was still a criollo singer whose music had a country flavor heavily influenced by the music of the Argentine pampas and the gauchos.

But he was an urban kid.

As in many great cities, there were populations in Buenos Aires that had been forced to emigrate from other countries by war or economic difficulties.  There was chaotic urban noise and emotional dissociation, the alienation that comes from the break-up of families and the loss of community, and the the anger and rage that result. Gardel was no stranger to this, and his first solo recording, in 1917, was a tango entitled “Mi noche triste ,” about a man sitting alone in his Buenos Aires room, crushed because his lover has just left him.

It was the first such recording ever made. Tango had existed for years before this, but more as a folkloric music and country dance.  This that Gardel was singing was urban, new, and instantly popular.

Gardel went on to become the biggest-selling music star in the Spanish-speaking world, an international phenomenon of enormous proportions. On October 12, 1924, Gardel made one of the first live radio broadcasts to be produced from the studio of “Lo Grand Splendid”, Glücksmann’s headquarters housed on the upper floor of his new “splendid” concert theater. (Now transformed into the most beautiful bookstore I’ve ever seen, the Ateneo Grand Splendid is located at Avenida Santa Fe 1860 in Buenos Aires.) 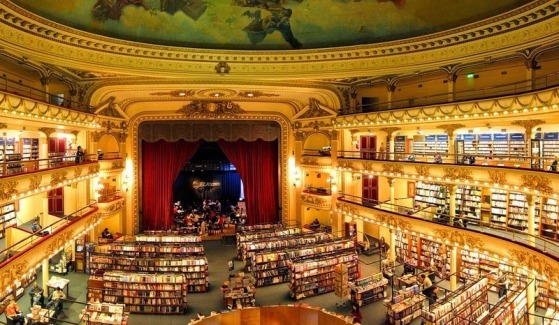 Gardel himself became a movie star so well thought of by Hollywood that by 1934 he was being prepared by Paramount Studios to become the next Maurice Chevalier. On March 5, 1934, Glücksmann arranged for a short wave radio hook-up, broadcast by Radio Splendid in Argentina –- from a studio in the Grand Splendid — and NBC in the United States. The artists were Carlos Gardel and his long-time guitarists Guillermo Desiderio Barbieri and Angel Domingo Riverol. This occasion was memorable for a unique reason, since in fact Gardel was singing in New York while the guitarists were playing in Buenos Aires.  It was one of the first such international broadcasts ever made.

Glücksmann had essentially gained control of the Argentine record industry. He did it while nonetheless becoming a hero to musicians through his practice of paying them royalties. He was the first in Argentina to suggest this, and in so doing made Carlos Gardel a world-class star and a multi-millionaire. Other Argentine musicians may not have climbed to Gardel’s heights of fame, but they all benefited from Glücksmann’s careful protection of their artistic rights..

Terence Clarke’s new novel, The Splendid City, with Pablo Neruda as the main character, will be published early next year. A translation to Spanish by the noted Chilean novelist Jaime Collyer will appear later in 2019.

By Terence Clarke in Uncategorized on August 30, 2018.
← Justice Done: The People vs. Monsanto On Tango: First the tango. Then the language. →