Home » Uncategorized » On Tango: With Gavito

On Tango: With Gavito 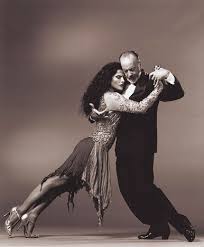 I believe it was in the Russian Samovar, a restaurant on West Fifty-second Street in New York City, that Carlos Gavito placed a hand to his forehead, stared down into his drink (some sort of whisky concoction that was colored red and pink, and perhaps even had a little paper umbrella in it), and offered his opinion. At first, I thought it was a sad observation, an effort at covering over the unintended comedy of what he had just seen. As it turned out, though, Gavito was in the first moment of an offer to me that changed my understanding of tango and milonga. I would leave New York a year later with knowledge that has stayed with me ever since.

Gavito was one of the best-known tango dancers of his generation. Born in 1942 in Buenos Aires, he was noted for perhaps the most svelte dancing style anyone had ever seen. When he moved, you watched him. He had many wonderful partners throughout his stellar career…extraordinary women all of them.  But really, you watched him. He was world famous, the lead dancer among that group of performers who toured the world with Forever Tango in the 1990s.

That evening, we had been sitting together at the bar. It was 1998, and I had been studying tango for four years. I had only a meager understanding of how tango is an expression of the national consciousness of Argentina. As such, if you really want to understand the dance, you have to know the history of that country (and particularly of Buenos Aires.) You must be able to speak Spanish and understand at least to some degree the unusual manner in which the language is spoken in that city. I had not at that time visited Buenos Aires, although I had a good command of the kind of generic Spanish that is taught in schools. But I knew little of the slang that is spoken in Buenos Aires and the very unusual accents that you hear everywhere on the streets. You should know those things if you wish to understand the color that makes tango lyrics so earthy, humorous, and often desperately sad. Also at the time I did not know the history of tango’s many rhythms and how they had arrived in Buenos Aires. A study of that requires an understanding of the enormous immigration to that port city of peoples from almost everywhere in the world during the nineteenth century. I can think only of New York City itself for a similar example.

In any case, I was dancing tango at the Russian Samovar (a weekly milonga there hosted by the inimitable couple, Carolina Zokalski and Diego Di Falco, with whom I was studying at the time.) All was well, as far as I could tell, especially in view of the fact that Gavito was at the bar, conversing with a woman companion, and occasionally turning away to watch me. I was studying with him, too. So, his opinion of what I was doing was important to me.

The tanda came to an end, and in a moment, a fast milonga came on. I asked the person I was dancing with whether she would like to do some milongas with me. The answer was “Yes,” and off we went.

After that tanda, I joined Gavito and asked his opinion of what he had observed. He laid his forehead onto the palm of his right hand. Slowly, with kindness and not a little chagrin, he said “Che, the tango was all right. But…” He sighed with actual despondency. “My God!” he whispered, shaking his head. “My God, the milonga was bad.”

I now know that what I had been dancing was simply a very fast version of the tango that I knew. I did not realize then that the milonga is a different dance creature altogether and requires way different talents than does tango itself.

But Gavito allowed me to recover from my own unhappiness with his pronouncement, when he said, “Listen, Terry. You give me two hours, and I will give you milonga.” I took him up on his offer a few weeks later and have never forgotten what he taught me.

Terence Clarke’s story collection, New York, is available in bookstores and on Amazon.