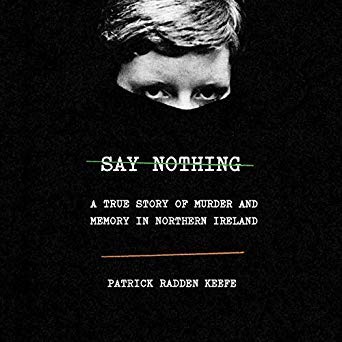 Whether you know little about The Troubles in Northern Ireland during the 1970s, or a great deal, this book will hold your attention from the first page to the last. But, a warning: This is a book about great cruelty on all sides.

Author Patrick Radden Keefe tells the story of the conflict mostly from the Catholic Irish and Irish Republican Army’s point of view. Gerry Adams (now retired from his chairmanship of the Sinn Fein political party, who was once a senior officer in the IRA [although he vociferously denies it to this day]) is a principal figure. The Price sisters, Dolours and, to a lesser degree, Marian, who were soldiers in the Irish Republican Army and involved in various terrorist operations (some of which included disappearing and killing turncoat IRA operatives known to the organization to be “touts”) are also major figures. Brendan Hughes, the fierce leader of the Provisional IRA (The Provos), who was instrumental to the planning of many horrific bombings and other IRA attacks, is also a principal in. this book.

There are many, many others, all of whom are described in fine detail by the author.

The book begins with the abduction of Jean McConville in 1972. A Belfast widowed mother of ten, she was disappeared by the IRA because, it was suspected, she was a spy for the British forces in Belfast. McConville was never seen again.  The book ends with the discovery, almost fifty years later, of McConville’s fate and the identities of those ultimately responsible for her disappearance and assassination. In between, the fascinating story of The Troubles is told from the point of view of numerous individuals, the disappearance of McConville being the single event upon which Keefe hangs his entire tale.

A major event in the book is the Boston Project, begun in 2001, in which interviewers from Boston College in the United States spoke with many of the people who had been involved in The Troubles, Irish and English alike. This takes up perhaps the last third of the book. It is a tale of the genuine wish by a respected academic organization to engage in truth-telling, which goes badly awry because of the poor legal advice that that organization received, or ignored, or assumed was iron-clad and legitimate. Many people engaged in The Troubles were interviewed, with the guarantee that the tapes and transcribed interviews would be hidden away in Boston College library archives until everyone involved had passed away. Because the guarantees offered by the Boston Project to the interviewees were poorly drawn up and without merit legally, many of the interviews were obtained by Northern Irish police investigators, who then acted upon them. This particular story, ancillary to The Troubles themselves, makes up one of the most compelling parts of the book.

I doubt that you’ll read a better book about this very sad chapter, among the many such in the history of Ireland.

By Terence Clarke in Uncategorized on April 4, 2019.
← On Tango: The Sweet Voice of Ignacio Corsini On the Fire at Notre-Dame →