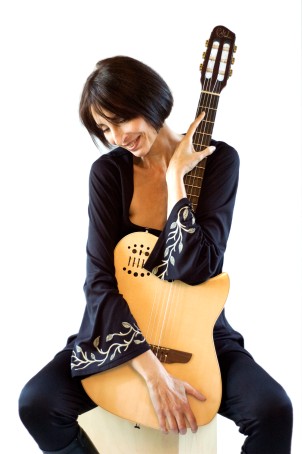 The next time María Volonté comes to where you live, drop everything and go see her in concert. You’ll hear intense tango, sung with Buenos Aires porteño charm and streetwise knowledge, delivered with grace and deeply felt passion. Some written by others; originals by María herself. And there’s more. María is an accomplished jazz singer as well, and you’ll see that she can carry her own in any North American or European jazz venue, no matter where.

María Volonté was born in Ituzaingó, a city in the Buenos Aires province, about twenty miles from downtown Buenos Aires itself. “I lived with my parents and my five sisters in a large, bright house. My father worked as a project draftsman and painted watercolors in an exquisite way. But above all he was a great showman who had been frustrated. He had spent the greatest portion of his youth acting, reciting, and singing in cinemas, theaters and cabarets. But as soon as he got married, his first wife made him know…clearly…that vaudeville and the delights of conjugal life were not compatible. After that, he devoted himself to transferring all his fascination for the world of the stage to his daughters.”

When María was five, her father brought home a new invention, a home tape recorder, and one of the first things he did was to ask María to sing for him. It was an ancient Neapolitan song “Catari (Cuore ingrato)”. Listening to herself for the first time, she wept, and she remembers the moment to this day. “There was so much secret pain in that melody, so much generous love! That day I discovered, unknowingly, that singing is to allow oneself to be pierced by passion.”

María’s father bought her first guitar when she was ten. “Something within me changed forever.” As she progressed through secondary school and beyond, she sang with friends, all kinds of music. “We used to sing folk tunes or rock songs written by Argentines. And thereafter in the 1970s we would mix the Argentine songbook with music by people from other countries…the Chilean Violeta Parra, Paco Ibáñez from Spain, el cubano Nicolás Guillén, another Spaniard Joan Manuel Serrat…. It was wine and song into the wee small hours of the morning, and it was shaping my courage and warming my voice.” 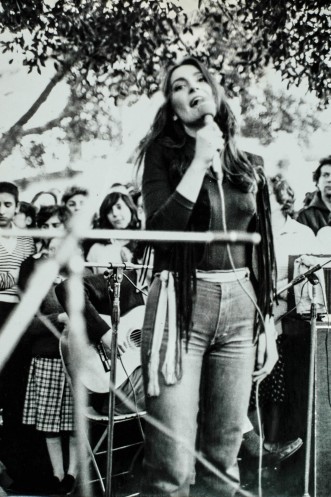 Married in the early 1980s, María and her husband lived in the San Telmo neighborhood of Buenos Aires. A subterranean folk culture was thriving in the city during those years, and she was an active part of it, paying her early dues as so many musicians must, wherever she could. “I sang outdoors at the Plaza Dorrego. I sang in many, many bar rooms. I sang in sheds.”

Her musical eclecticism was not to be denied. But María knew even then that there was one sort of music that was meant for her. “I clearly realized that my destiny was in tango.”

Maria Volonté’s home is still Buenos Aires, where she lives with her second husband, American writer, musician, and photographer Kevin Carrel Footer. But they concertize together extensively in North America and Europe, visiting the San Francisco Bay Area (where I live) once or twice a year. You can see them together in a recent NPR Tiny Desk Concert video.

On her website, you’ll see some other fine videos of María at work. You’ll get a sense of the breadth of material with which she works, and you’ll see especially what a true tanguera María Volonté really is. Her recordings are available on Apple iTunes.

(Thanks to Ricardo García Blaya and TodoTango for the quotations from María Volonté. Terence Clarke’s new novel, When Clara Was Twelve, will be published in 2020.)

By Terence Clarke in Uncategorized on December 3, 2019.
← On Marilyn Yalom On Tango: “The Two Popes” →