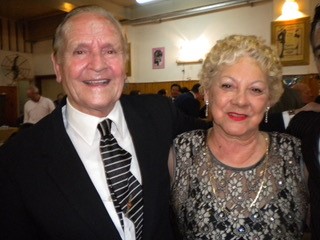 Beatrice Bowles  and I were visiting Buenos Aires in 2006, and were told about the club Viejo correo at Avenida Díaz Vélez 4820. Diaz Vélez is an interminably long thoroughfare, and on this particular night, we worried as very heavy rain coursed from above. Our taxi driver had to lean well forward over the steering wheel in order to be sure that his view of the road was clear. What was not obscured by the downpour itself on his windshield was blurred by the hurrying of his old, ragged wipers across the glass.

We got to the club, though, and were greeted by a couple of men at the door, armed with large umbrellas. They escorted us in, and we immediately noted the black and white tiled dance floor, gleaming smooth, that was surrounded by tables-for-four at which many dancers were sitting. What made the place immediately special for us was that the dancers were well-dressed. This is not something you normally see in Buenos Aires milongas. That city is infected with the same nuevo-homeless style of fashion, most prominently among men, that you see in almost every other American or European city these days. Levis, T-shirts, no verve, etc. At the Viejo correo, every man had on a tie and a suit. The women were all dressed with a preference for real elegance.

The Viejo correo is a local place, visited mostly by neighborhood dancers who all seem to know each other well and, we found, are exceedingly friendly. They were surprised that a couple such as we could even find the place, and they watched carefully as we danced. They seemed equally surprised that we could essay the tango with at least some panache. Many of the other dancers wished to talk with us, and when they found we also had Spanish, our evening filled with conversation.

Many of the men offered the cabeceo to Beatrice, and always thanked me when they escorted her back to our table, for not being offended by their taking her from me. It was clear to them that she could dance, and I was not about to intervene with her opportunity to be on the floor with authentic milongueros porteños. The entire experience, for both of us, was unique.

There was a further surprise. One of the renowned couples in tango at the time were Lito and Lidia Filippini, and we learned that they were going to arrive at the Viejo correo, to dance that evening. “Not to perform,” one of the men assured us. “They come here all the time, just to dance, like the rest of us.”

When the Filippinis arrived, they were greeted by almost everybody as they passed through the tables to their own, which had been reserved for them. They were an older couple, dressed just so, as were all the others in the room. And indeed they did not perform. Beatrice and I watched as they joined others on the floor. Their dancing was in no way flashy or overtly gymnastic. They too were real milongueros and danced with care and elegance spiced by the usual Argentine porteño intensity.

Beatrice and I danced a tanda, and we sensed we were being watched by the Filippinis. This can be an unnerving experience for dancers who are not professionals themselves. After dancing, we sat down at our table and, heads held in reserved silence, calmed our nerves with a few sips of malbec. After more tandas, we saw that the Filippinis were leaving, and as they approached our table, I nodded to Lito. To our astonishment, he and Lidia struck up a conversation with us. Where were we from? Were we enjoying Buenos Aires? Where else were we dancing? And then they both told us that they thought we were dancing well. It had been a pleasure for them to watch, they said. I reached out a hand to Lito, which he shook with enthusiasm, and we both thanked them. It was then that I noticed that the others in the club were watching the conversation. It was clear that they approved, too.

The evening, of course, astonished both Bea and me.

As you’ll see from the video that accompanies this piece, the Filippinis dance in an older style free of the balletic macho fireworks that so often mar contemporary tango.

(For another adventure from that evening at the Viejo correo, see my piece “Big Nose in Buenos Aires.”)

By Terence Clarke in Uncategorized on March 2, 2020.
← “As dramatic and emotional as it gets.” On Tango: Tears for Orlando Paiva →